This section of our website is dedicated to all of the talented people who help us transform our (and others) creative ideas and mundane tangibles into remarkable works of art. 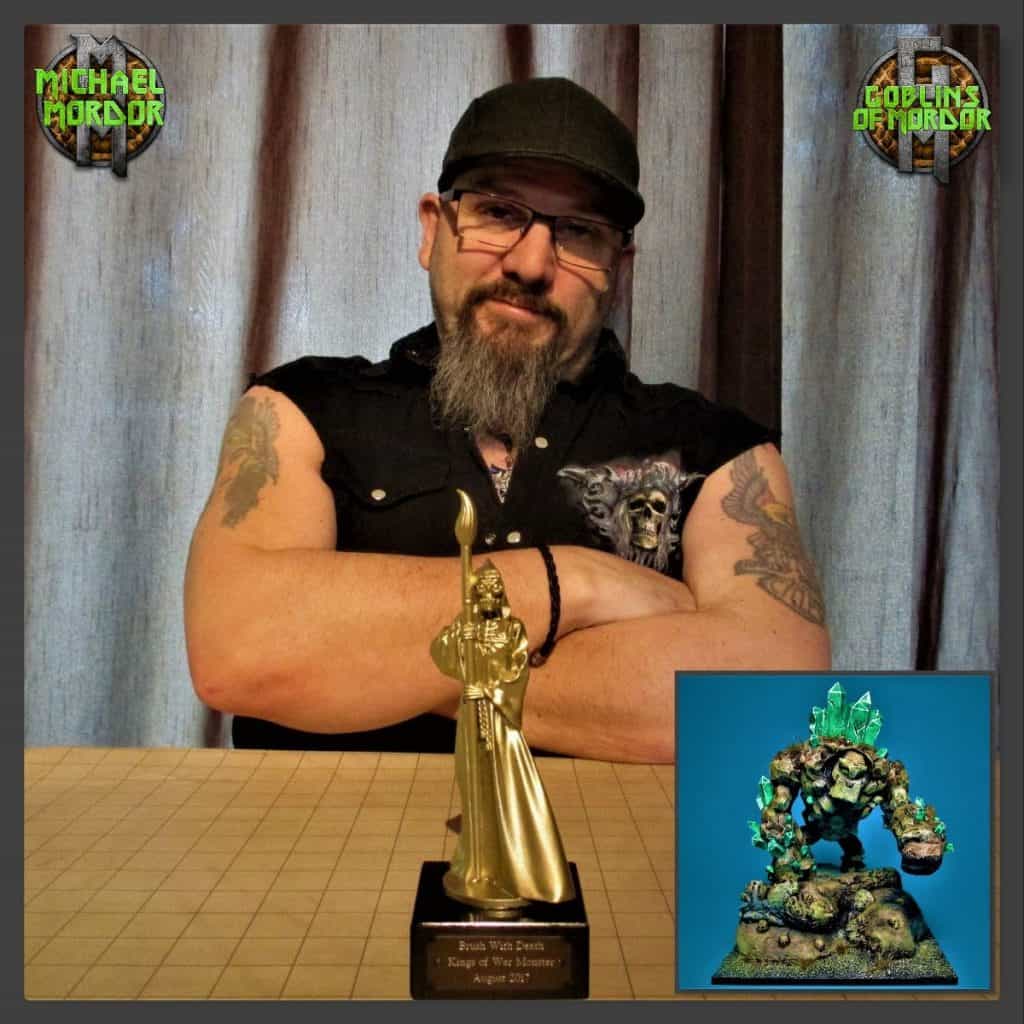 Michael Mordor – our friend from Scotland, is absolutely one of the best, and most prolific tabletop miniatures painters in the entire world.

Mr Mordor commands an army of online Goblins who support him; via Twitter (@Goblins_Mordor), as well as on Patreon . Recently we had a chance to interview him.

CC: Where were you born?

CC: Michael, how long have you been painting miniatures?

CC: What is your current occupation?

CC: What did you want to be while you were growing up?

CC: How did you get into the hobby?

MM: I started painting Miniatures in the 70s with the Airfix toy soldiers. Then in the 80s my Dad bought me Warlock of Fire top mountain the board game, which came with my first set of fantasy miniatures.

And having a great Love of Labyrinth by Jim Henderson and Films like Jason and the Argonauts, just fueled my passion to paint Fantasy Miniatures.

CC: How many miniatures do you think you’ve painted to date?

CC: What’s the most miniatures you’ve ever painted in one day?

CC: What types of paint do you use?

CC: What type brushes do you use, and how often; if ever, do you use an airbrush?

MM: Army Painter. I have an Airbrush, but I do not use it much at all and if I do it is for undercoating only.
____

CC: Have you had any formal training?

MM: I did a B.A in Sculpture, Art in Life studies (Drawing Naked People) LOL Medium I use is Pastel and Charcoal
____

CC: Have you ever won any prizes or awards for your work?

MM: First award was Golden Demon under 16 awards in 1986-88. The last was Brush with Death by Mantic Games, June 2017. Too many to list in between. Never remember all the dates.

CC: What advice would you give to those wanting to try and do what you do?

MM: Miniature Painting is Fun and that is all you need. If you are having fun painting you are doing it correctly. Just remember no one is perfect when they first start, it takes time and patience, but the rewards are worth it.
____

CC: If you could do any other profession what would it be?

CC: What would you do with a million dollars?

MM: Open a gaming and painting club for people with depression and anxiety
____

CC: What three people; past or present, would you invite to dinner?

CC: Name something you’d like to do before you die.

CC: Who is your Hero or Heroine?

CC: If you could have any superpower what would it be, and why?

MM: Invisibility, so I could hide when people bore me
____

CC: What is your favorite curse word?

CC: What is your favorite sound?

CC: Name three questions you’d ask your government if they HAD to answer honestly.

CC: What is your favorite game?
MM: Dungeon Saga by Mantic Games
____

CC: AS YOUR CROWNED CROW QUESTION FOR ETERNITY, WOULD YOU RATHER…

A.) Have to spin around three times and begin your answer with “In my expert opinion”, every time someone asks you a question.

B.) Stroke your chin thoughtfully before saying “Let me get back to you on that”, before turning around and walking away

MM: I have the beard so would go with B … LOL

CHECK OUT SOME OF MICHAEL’s WORK BELOW